LANCASTER, OHIO – A new exhibition at the Decorative Arts Center of Ohio (DACO) investigates the role played by memory and nostalgia in a body of work created during the 19th and 20th centuries by a group of folk artists of Ohio known collectively as the “Painters of Memory”. ”

“Hindsight: The Art of Looking Back” was curated by Andrew Richmond, President and CEO of Wipiak Consulting & Appraisals, and his wife, Hollie Davis, President and CEO of Price4Antiques.com. The title is a riff on the saying “Hindsight is 20/20”, but about a time when Covid-19 created poignant opportunities for memory and nostalgia.

A native of McGuffey, Ohio, and a relative of William Holmes McGuffey, who edited the Eclectic Readers who became informally known as the “McGuffey Readers”, Leuty moved to Columbus to marry John Russell Manahan. In the 1950s, and without formal training, she began to paint pictures based on memories of her childhood; she made about 80 works before she died. 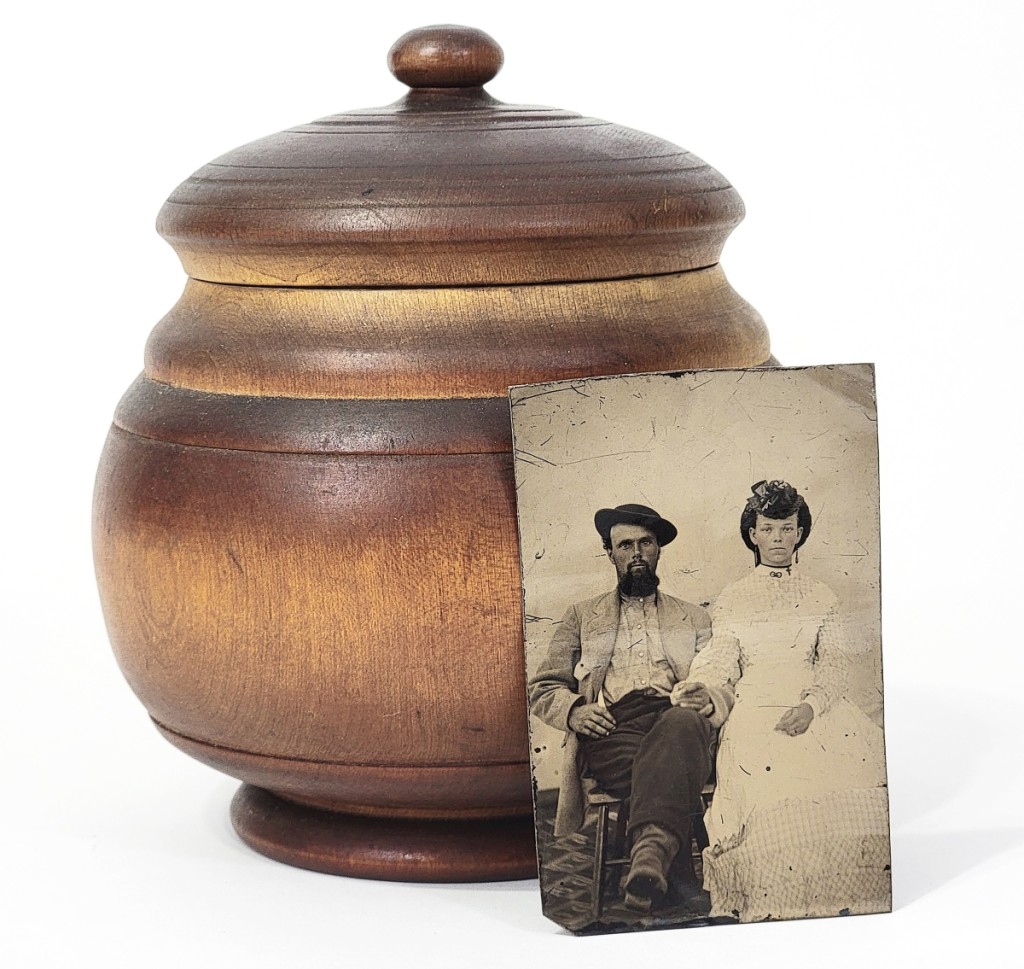 An object and its owners. This turned maple sugar bowl is illustrated with a photograph of its original owners, members of the Pease family, Concord, Ohio, late 19th/early 20th century. Private collection.

Manahan was known and exhibited throughout Ohio, including in 1961 when the Franklin County Historical Society in Columbus, Ohio featured 54 of his works in an exhibit called “Early American Farm Life”.

In the foreword to this exhibition, Manahan describes his artistic inspiration: “Our lives are enriched by having experienced a deep nostalgia for the past. Our contact with previous generations gives us the desire for objective knowledge and the assurance that we are progressing in the realization of the purpose of our present life. Understanding how the first American farmer lived, the difficulties he had to overcome, the caring spirit and the compassion he possessed, will allow us to face our adversities with autonomy and gratitude. My images are meant to bring intangible value to people who can draw from them the noble spirit of our pioneering grandfathers.

According to the biography that Richmond and Davis compiled for the exhibit, Manahan received a commendation from Lieutenant Governor Richard Celeste. However, she never achieved the fame enjoyed by other folk artists. When asked if she regretted not being discovered, she joked, “Discovery? I never knew I was lost.

Despite offers, Manahan was reluctant to sell his work during his lifetime, a reluctance that may have limited his legacy. After Leuty’s death, Manahan’s daughter put her works – from sketches and studies to finished paintings – in a closet where they remained for nearly 30 years until she agreed to sell them to a collector. private from Ohio who had seen some of Manahan’s works in a small Ohio. exposure. This collector – who has chosen to remain anonymous for now – decided the time was right to tell Leuty’s story and approached Richmond with the idea for the exhibit. 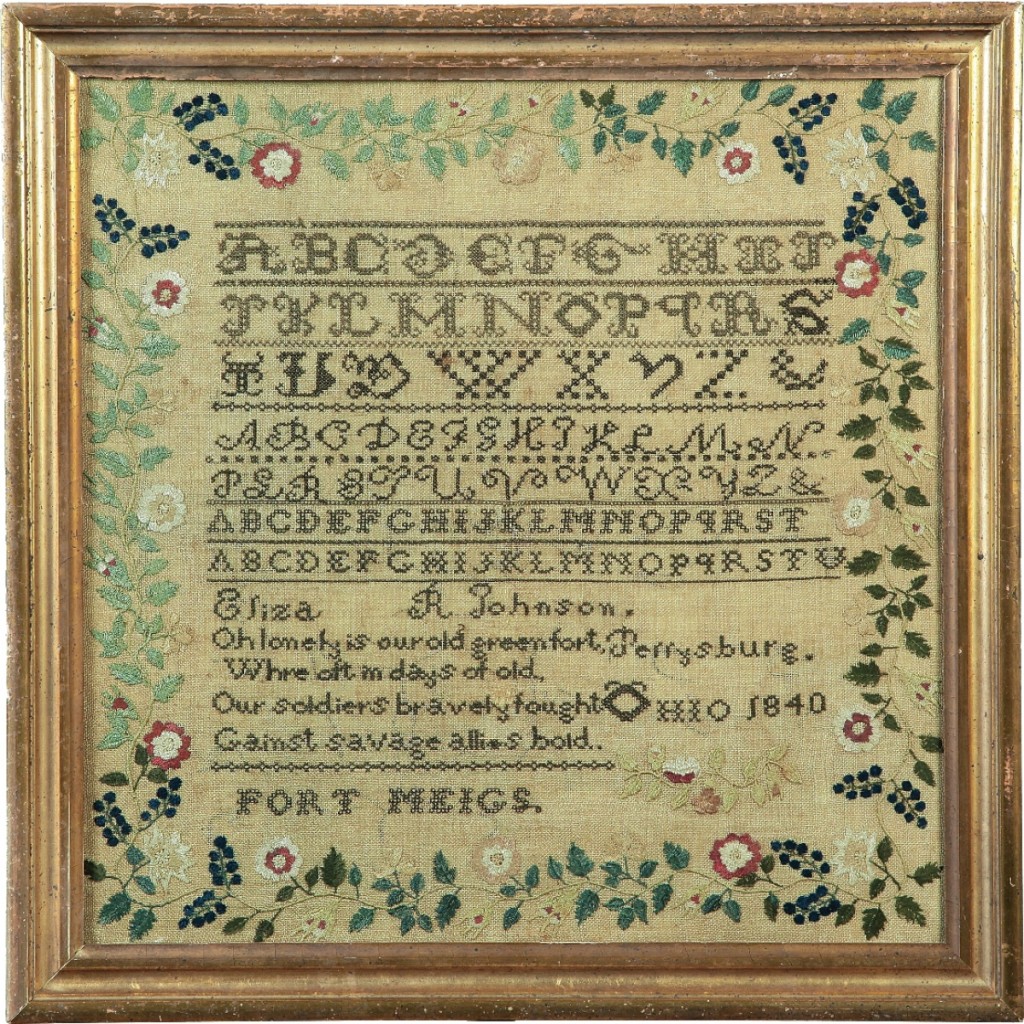 This sampler, worked in silk on linen by Eliza R. Johnson of Perrysburg, Ohio, in 1840, references the local Fort Meigs in her lines: “Oh lonely is our old green fort / Where often in ancient times / Our soldiers have bravely fought / Against daring savage allies Private collection.

“When I first encountered Leuty McGuffey Manahan’s handcrafted paintings, I was struck by the nostalgic appeal of his depictions of his childhood in rural Hardin County, Ohio,” Richmond said. “These paintings were not just created from memory, but were designed to act as memories made real on canvas – paintings from memory, if you will.”

Manahan’s works, of which “Hindsight” features nine, can be described as folk genre imagery: depictions of everyday life, in a naïve and humorous way, and usually with an added touch of social satire. She filled her paintings with so much detail that it usually takes several viewings to fully appreciate them. Her style is primitive but focused, and for the attentive observer there is an edginess to her content and execution, and her paintings form a continuous narrative that underscores the importance of the role that women have played in rural American life. .

“Manahan’s interior scenes are not just based on what is remembered, but on a strong sense of nostalgia,” Richmond said. “These images and objects, like memory itself, exist on the border between history and nostalgia, between reality and fiction. This border has always been a difficult place to interpret, perhaps even more so today than ever.

The show includes “Stage Stop” by Grandma Moses, on loan from the Bennington Museum. It provides a useful comparison with the works of other artists, as well as that of Manahan, often referred to as “Ohio’s Grandmother Moses.” 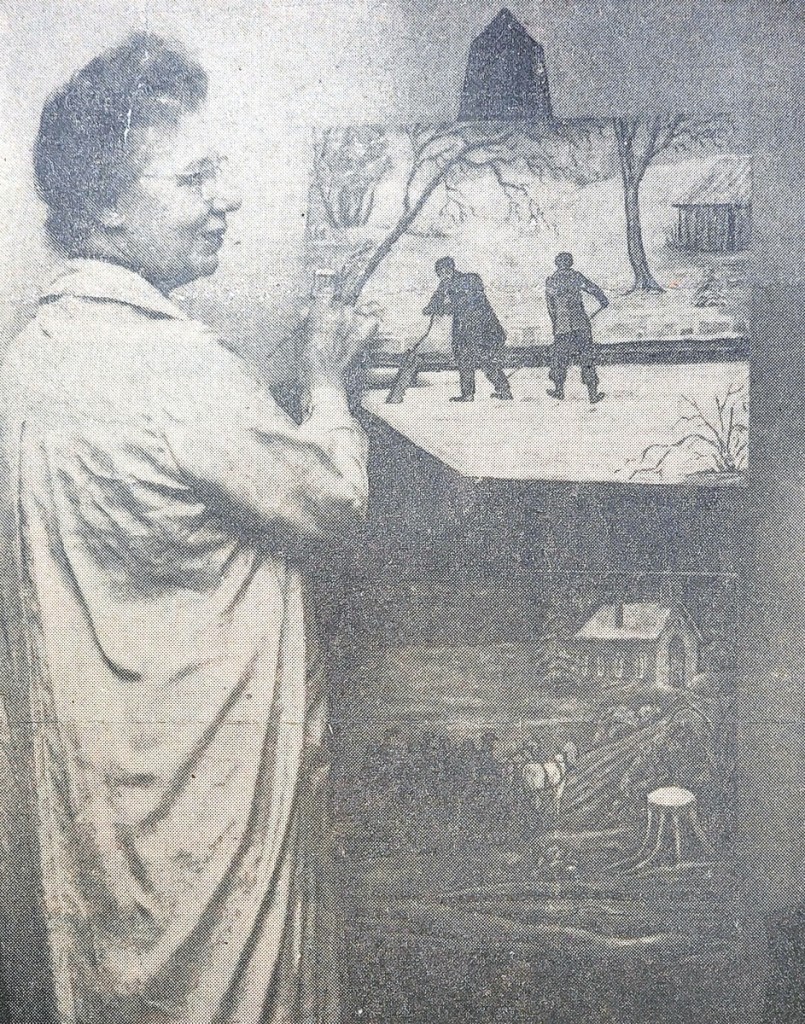 Photograph of Manahan at work painting “Cutting Ice”, which was published in the Columbus Expedition on June 20, 1955, in an article about an exhibition she had in New York. She hasn’t added the little child, the dog, or the figure throwing the snowball yet.

“Someone applied the [‘Grandma Moses of Ohio’] nickname to Leuty at one time; Paul Patton is nicknamed “Grandfather Moses”, says Richmond. “I suspect the name is pretty common, but we wanted to get a real ‘Grandmother Moses’ because that’s the name everyone knows.”

Beyond their contemporary life and a common inspiration rooted in rural memory, the two artists and their works are very different. Robertson focused on the New England landscape, while Manahan’s works usually depict interior views, or perhaps exterior views, but in a much more intimate way. Humor is also an essential element of Manahan’s works, a feature less common in Robertson’s paintings.

The exhibition asks questions intended to prompt the viewer to consider their earliest memories, how memories are preserved, how memories change over time or how they differ from those of others, and with whom memories are shared. Two spectators will not have the same museum experience. 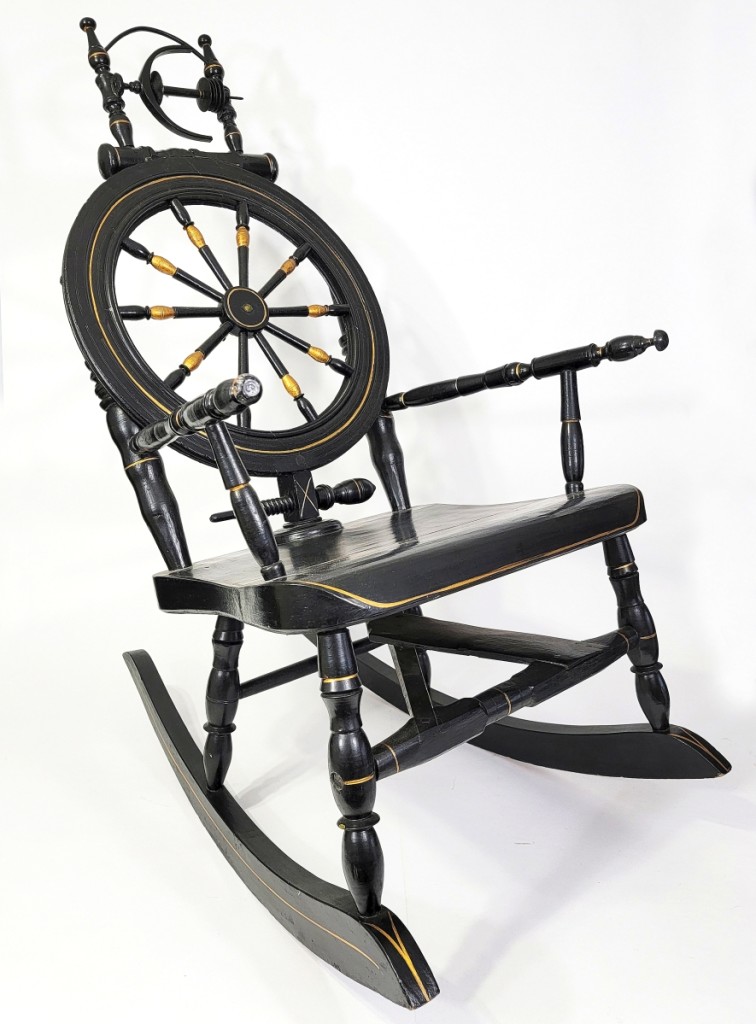 Props to entice a trip down memory lane come in the form of three-dimensional pieces – called “memory items” – that provide a physical embodiment of times past. Photographs of Colonial-style interiors and gardens taken by early 20th-century New England minister Wallace Nutting. Colonial Revival furniture designed, if not made, by Nutting and his wife. Whether it’s a rocking chair made in the late 19th century from parts of an early 19th century spinning wheel, or a keepsake jug mounted like a lamp, these tangible objects are sure to encourage the viewer to remember similar objects from his own past or to create mental thoughts. comparisons with different objects of his personal history.

This story was written against the backdrop of the Christmas and New Year holidays which, due to the pandemic, have felt markedly different than they once did. One wonders what the Ohio Memory Painters, if they had lived through this era, might have remembered and how those memories would manifest.

“Hindsight: The Art of Looking Back” will be on view until April 24.

The Ohio Center for Decorative Arts is housed in the Reese-Peters House at 145 East Main Street. For more information, www.decartsohio.org or 740-681-1423.

The reason behind the Comoros goalkeeper jersey ...