The two new Low MPVs are expected to meet the public for the first time at the 2021 Gaikindo Indonesia International Auto Show (GIIAS), which opens to the press on November 11. The organizers’ original plan was to have the show in August, but Better late than never. We have covered GIIAS at BSD City live every year since its inception, but that race was halted in 2020 and we’ll have to drop this one as well. Soon maybe.

Today’s second-generation Avanza has been around for a decade now, having debuted in Indonesia in 2011. During that decade, rivals have come and gone – for example, the original Honda BR-V debut. in 2015, and a new one of them will join the Avanza at GIIAS. For a long time, this is underestimating.

For such a long wait, it’s fair to expect a complete change, and it looks like the Avanza is unrecognizable. We saw photos of the seven-seater Veloz in a showroom last month, but the main photo above shows a clearer view of the rear of the new MPV in white, taken in Karawang, in the west. from Java, where it is made.

The new Avanza sports full-width taillights separated by the Toyota emblem. A horizontal LED strip is all the rage now – as seen on the new Toyota Harrier and Lexus UX SUVs – but we’ll see how light it is and how much its decorative trim is. The Avanza’s taillights have always been vertical, so it’s a big departure that also highlights the new car’s substantial width.

Underneath the sculpted tail lights are fake vents with a reflector – these remind me of the T-shaped side trim on the BMW 3 Series G20. Elsewhere there is a wide skid plate style trim in silver, the Veloz branding on the license plate trim, and a Q badge indicating the Indonesian trim level.

We get a good view of the sides of the new Avanza on the white car, which wears the same two-tone alloys as the show unit – they’re rather generous in size. Additionally, the wide-angle image of the white car gives us a better look at the lines of the new Avanza – a sculpted beltline flows from lamp to lamp, in a straight line “piercing” through the grips. door.

The outlines of the wheel arches are drawn high enough from the actual arches – no SUV-style black plastic here, but there are (possibly fake) roof rails. There is also a chrome trim that connects the daylight opening to the rear window, separating the central part of the body from the D-pillars.

We’ve already taken a look at the bold face of the new Avanza, dominated by a large trapezoidal grille. In the Veloz form, the grille is filled with a Y-mesh and flanked by slim LED headlights with a DRL strip underneath. There is a chrome strip on top of the grille, which flows into the headlights and continues through the front fenders to the windows. From there it joins the D-pillar trim mentioned above.

The interior is also a big departure, a clean design sporting crisp lines and a tall center console. There’s a large, stand-alone touchscreen main unit, a new designer steering wheel with two button spokes, a start button, and what looks like strips of ambient lighting around the gear lever. Behind this lever is an electronic parking brake switch, on an Avanza! The layout and sharp angles remind me of the Ativa / Rocky / Raize dashboard, but slightly less funky, flatter, and rendered in two tones.

The passenger section photo shows a huge roof-mounted screen, a single retractable cup holder, USB charging ports, and sliding seats. Interestingly, the front seat backs have organization slots above the usual lower pocket. There is a wide slot (probably good enough for a tablet) and a smaller one that looks perfect for a phone. A simple but practical function for a family wagon.

Quantum leap stuff, if you remember what the exiting Avanza looks like. No official details yet, but we also expect a drastic change under the skin, especially a move to the new Daihatsu Global Architecture (DNGA) that also underpins the Ativa / Rocky / Raize. If so, the Avanza will switch from ladder frame to unibody construction and rear-wheel drive to front-wheel drive. 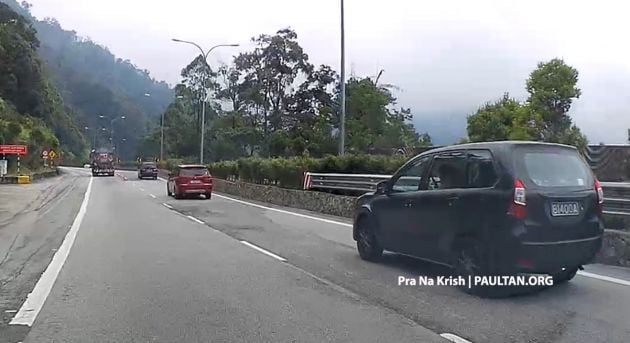 Will the Avanza continue with 1.5L NA power – like the new BR-Vs and Mitsubishi Xpander – or will it share the 1.0L turbo and 1.2L three-cylinder NA options? three jars from the Indonesian Rocky / Raize market? What is certain is that active safety and driver assistance functions will make their debut on the model, under the Toyota Safety Sense brand – note the Perodua-style stereo cameras at the top of the windshield.

If you’re wondering what all of this has to do with the Perodua Alza, here’s a recap. Based on the late Daihatsu Boon Luminas aka Toyota Passo Sette, the current Alza was unique in our region by being based on a JDM model. He is 12 years old now, and a replacement is due. Merging it with the economy Toyota / Daihatsu minivan for the region – the Avanza / Xenia – makes sense for economies of scale.

The DNGA for the upcoming Alza / Avanza also fits well into Perodua’s image – the Rawang-based automaker has invested heavily in producing DNGA for the Ativa, which sure won’t be unique, but the start of ‘a new era. Like Daihatsu in Indonesia, Perodua produces some T-badged models, and the NR engine it manufactures is also supplied to Toyota. All with the family.

As for the timing, in May Sapura, a supplier to Perodua, said the new Alza, codenamed D27A, is expected to surface by the end of this year. “We are currently in the development phase of allocated parts for the replacement Alza model (D27A) which is expected to launch by the end of 2021. We have also secured the supply of the case differential assembly from Akashi Kikai Industry. Malaysia, a Tier 1 supplier for Perodua’s transmission module, scheduled for mass production in December 2021, ”Sapura said in its 2021 annual report.

Of course, that could be the initial timeline and target given by P2 to suppliers, and things might have been delayed due to Covid-19, but we know the D27A Alza is coming very soon, even if not not in 2021. Perodua’s focus would now be on the Myvi 2022 facelift, which was spotted during a commercial shoot.

So far, what do you think of the major Avanza reboot? Here’s the new second-generation Honda BR-V for comparison.